Update on the IRA 'One Rollover a Year' Rule 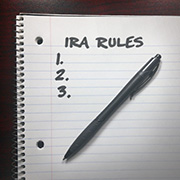 On the heels of a controversial U.S. Tax Court decision, the IRS announced plans to revise its current guidance on IRA rollovers. Starting January 1, 2015, the IRS will strictly apply the one-rollover-per-year rule on an aggregate basis, rather than on an IRA-by-IRA basis. This announcement could have important -- and unfavorable -- implications for taxpayers with multiple IRA accounts.

The U.S. Tax Court made a controversial ruling in January that contradicted an IRS publication designed to explain the law to taxpayers. In Bobrow, the court ruled that the one-rollover-per-year rule applies to all of taxpayer's individual retirement accounts (IRAs) in aggregate, rather than on an account-by-account basis. This ruling is significant for taxpayers with several IRA accounts.

Soon after the Tax Court decided this case, the IRS issued Announcement 2014-15, which adopts the court's less taxpayer-friendly interpretation of the rollover rules. The IRS also plans to withdraw its proposed regulations and revise Publication 590, Individual Retirement Arrangements, which previously set forth the IRA-by-IRA rollover guidance. These changes will mirror the court's interpretation in Bobrow.

Announcement 2014-15 confirms that a direct trustee-to-trustee transfer is not a rollover and, therefore, will be not affected by this decision. The IRS has received comments about the administrative challenges presented by Bobrow and understands it will require IRA trustees to make changes in how they process IRA rollovers and draft IRA disclosure documents. Accordingly, the IRS announced that it will not apply the new interpretation to any rollover that involves an IRA distribution occurring before January 1, 2015.

Regardless of the ultimate resolution of the Bobrow case, the IRS expects to issue a proposed regulation providing that the IRA rollover limitation applies on an aggregate basis. The regulation would be effective no sooner than January 1, 2015, however.

Where Do We Go From Here?

The Tax Court refused the taxpayers' motion to reconsider its decision on the basis that it conflicted with IRS Publication 590. The court noted that neither the taxpayers nor the IRS mentioned Publication 590 at trial. Even if the parties had posed this argument, the court determined that the publication would not have provided substantial authority for the taxpayers' position.

Another reason the court denied the taxpayers' motion was that the IRS and taxpayers had reached the basis for a proposed settlement together. So the issue is closed, as far as the Tax Court is concerned.

If the taxpayers try to appeal Bobrow, they are unlikely to win, given the recent IRS announcement that it will adopt the aggregate rollover interpretation. It's possible that Congress could revise the rollover rule, which was originally enacted in 1974 when IRAs were less popular. But no legislation has been proposed to date.

For taxpayers with multiple IRAs, the aggregate rollover rule could be problematic. Previously, taxpayers used multiple rollovers to fund businesses or for personal financial purposes. These individuals must now be extremely careful when attempting to make tax-free rollovers of amounts distributed from their IRAs.

Years ago, IRAs were subject to a $1,500-$2,000 maximum annual contribution amount and were intended to provide a simple retirement savings vehicle for taxpayers with no pension plan coverage. Today, IRAs have blossomed into a group of plans that includes traditional IRAs, Roth IRAs, Simplified Employee Pensions (SEPs) and Savings Incentive Match Plans for Employees (SIMPLEs). The maximum contribution has grown to $5,500 a year (plus $1,000 for a "catch-up" contribution) for traditional and Roth IRAs, with higher contribution limits available for SEPs and SIMPLEs.

The general statutory rule is that an amount distributed from an IRA must be included in the recipient's gross income for federal income tax purposes (except to the extent the distribution consists of non-deductible contributions). A favorable exception applies when the distributed amount is rolled over into an IRA, individual retirement annuity, or qualified retirement plan by no later than the 60th day after the day on which the taxpayer received the distribution.

The following statutory fine-print may cause taxpayers to trip up:

The one-year waiting period between rollovers begins the day you receive the distribution.

The 60-day period begins the day after you receive the distribution.

The funds are due back in an IRA on the 60th day. You don't get a break if the 60th day falls on a holiday or weekend.

If you make the contribution after the 60-day deadline you could be subject to the 6 percent excess contribution penalty.

If you're under age 59 1/2 and none of the exceptions apply, a rollover failure will result in not only taxable income but a 10 percent penalty.

Waivers may be available for certain situations, such as an error by the financial institution, death, disability or hospitalization, but these waivers are rare.

You cannot roll over a required minimum distribution.

You cannot fund the IRA with collectibles, such as artwork, coins or stamps.

As the complexity of IRA plans has blossomed over the last 40 years, Publication 590 has likewise grown to 114 pages, including tables and indices. The publication provides enough fine-print to confuse even sophisticated taxpayers. Contact your financial advisor or tax professional to make sure your rollovers meet the new aggregate rule and survive IRS scrutiny. Please call if you would like a referral to a financial advisor to prvoide a second look or analysis of your IRA investments.