6 Things I Learned from Robert Jordan

I recently had the opportunity to spend an afternoon with Mr. Robert Jordan. Robert has been launching and growing companies and helping other entrepreneurs do the same for the past twenty years. His first company, Online Access, put him on Inc. magazine’s Inc. 500

list of fastest growing companies, Online Access, the first Internet-coverage magazine in the world, ran for ten years and after its sale Jordan launched two companies: RedFlash, a project implementation team; and interimCEOinterimCFO, the worldwide network of interim, contract, and project executives. Robert’s passion was to learn what inspired other highly successful entrepreneurs.

Robert’s book entitled, How They Did It-Billion Dollar Insights from the Heart of America, chronicles his interviews with 45 of the most successful living company founders. He spent four years assembling and interviewing very private and often reclusive champions of the business world. Each business founder started, grew and sold their company for $100 million or more - or took their company public for a value of $300 million or more. Those champions explained to Robert how they succeeded, described their failures and identified their ‘eureka’ moments when things finally clicked.

1. Failures May Ultimately Lead to Success

“I’m amazed that one of the biggest home runs I’ve ever had in business was the direct result of being engaged in a failing effort. I’ve been in these Interim CEO positions now for 18 years and the worst project I ever took on only took me a couple of days to discover that the owners were doing bad things, so I had to leave. There was no way I was going to stay where people were not acting with integrity. This was a project I needed.

I was not coming into this project as someone with inherited wealth or anything like that. But literally getting off the elevator from leaving this client, I ran into some old acquaintances, and we decided to form a new company. That venture went from zero to $150 million in five years. It was completely the action of getting off the elevator at the right point in time to see those people and to decide to do something new.”

“In some ways, if you pretend you’re Thomas Edison, and you’re committed to the idea that you’re going to perfect a light bulb. By the way, he did not invent it, but he did perfect it. There were 3,000 filaments before Edison finally got to a stable material to create a light bulb. When filament number 1,000 failed, did Thomas Edison say to himself, ‘I must be a bad person. I better stop. I better go home.’ Of course not. He didn’t attach personally to that outcome.

I’ve tried to learn over the years not to attach personally to outcomes. A lot of things you attempt are not going to work. It’s just the nature of effort. No one bats a thousand, and that’s not the definition of success. I look at it with curiosity and that these are experiments and some will work and some won’t.”

3. Mentors and Coaches Can Make a Big Difference

“I have been blessed with great advice, coaching and mentorship throughout my career, and that’s not something that stops. It helps if you can come from family that is supportive. Nobody does it alone. Some of the best, earliest advice that I got launching my first company still comes back to me. At the same point, I try to remain curious and stay in a learning mode that that even with the businesses I’m engaged in today and working to grow, that I’m always open to learning more, to good coaching and good advice, and I’m happy to return the favor if I can. 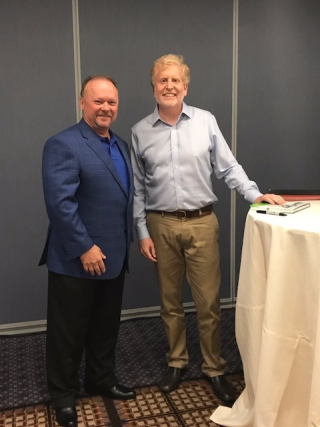 When friends or folks I don’t even know approach me, I try to have the attitude of being helpful. And I know you come from that same place as well, Scott. You know exactly what I mean. You’ve been a great mentor and coach for me, So, thank you!”

4. Persistence Against Often Insurmountable Obstacles, was a Common Characteristic for Successful Business Owners

“Especially for entrepreneurs, ignorance has got to be one of the most powerful forces in our favor for all of us. As said in the past, it is so common that successful company founders find that it’s not Plan A. It’s not the initial design that ultimately proves to be the most successful thing for them. It is that, along the way, usually some insurmountable obstacle comes up and that forms and shapes them in their business and that is what produces success. So, in my case, with publishing a magazine, even though I was young starting, I understood very well the mechanics of producing a magazine and how you go out and sell ads. That proved not to be a challenge.

5. Curiosity and Ongoing Willingness to Learn is Critical

“I think sometimes the older we get, we get a little entrenched or engrained in what we know. And, it’s very dangerous not to come at the world with fresh eye. Just because you have a lot of experience encountering a new client, a new prospect and they fit into some kind of pattern can be a dangerous thing. So, I think curiosity is something that can keep you fresh.

The activities of an advisor with clients can almost feel like hand to hand combat. If somebody doesn’t necessarily respond well to us today, we can take it personally, but it’s never personal. We don’t know what kind of day they are having or what’s going on in their life. The success any of us have is going to be based on persistence. There just isn’t any substitute for it, and he or she who stays in the game is who will win in the end.

To have that mix of stubbornness, which says I’m staying in the game and, and the same point, this openness, this flexibility that says, ‘Well, maybe I need to adjust my approach. Maybe I need to learn something new.’ I think that kind of combination, that kind of ability to be sensitive to that mix is how we achieve success.”

6. Always Bring All of You to What You Do

The afternoon with Robert was both inspirational and encouraging. The six (6) items listed above were only a few of the inspirational topics that were discussed.