The holidays are filled with all kinds of traditions and events, some going back generations.  We asked around the office for some to share their favorite holiday traditions!  Enjoy checking out what some of the members of the team had to share! 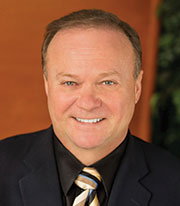 Christmas always brings such a wide range of memories. I am from a large family. When we were young, if you needed something from August or after, that would usually be received as a Christmas present. This would include socks, underwear, books, and more. There would be a huge mass of presents under the tree to wade through.  The morning would start with opening gifts in our stockings, which would typically include some candy and jokes, gags, or funny gifts. Finding a good stocking gift can be very challenging. This tradition continued as we grew up and had children and families of our own. I have two brothers that have exchanged the same Christmas card for 20 years -each crossing out the other’s name and replacing that with his own name. One brother got me a talking fish mounted on a plaque, plastic eyeballs, and similar items were not uncommon from the science store, that used to be in the mall. Recycling Christmas presents between my siblings from my parents was not uncommon. Truly the best memories are of the family getting together. The kids and I would have our family Christmas in the morning. Over the years, my kids each received a golden retriever (Buddy and Spike) as Christmas presents in a loosely wrapped package. We were blessed with Buddy and Spike in our lives for the next 16 and 17 years. 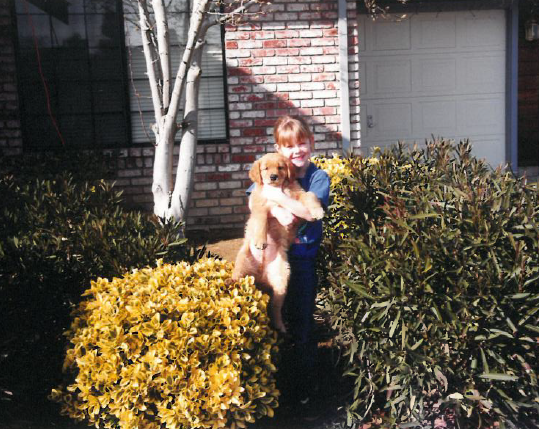 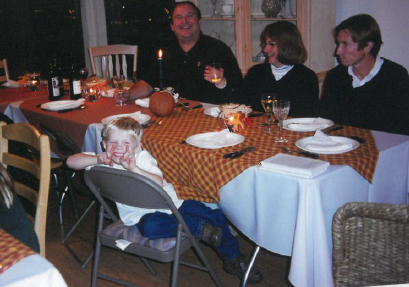 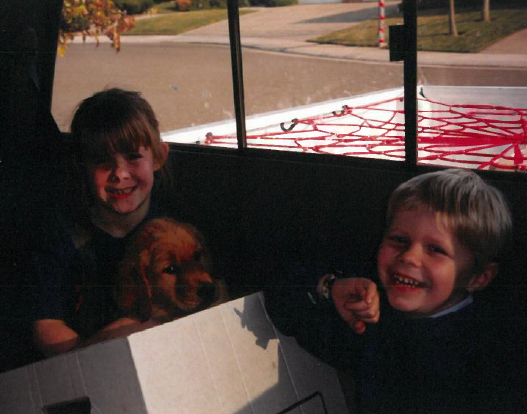 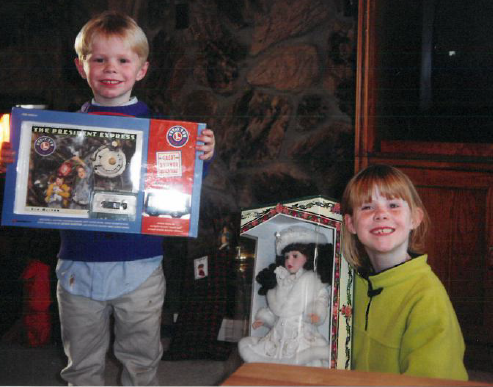 Additionally, we've had a Christmas cactus in our family for almost 20 years that is starting to bloom! 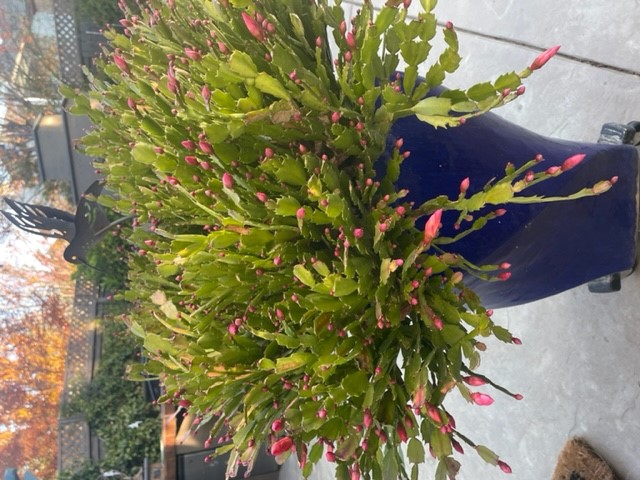 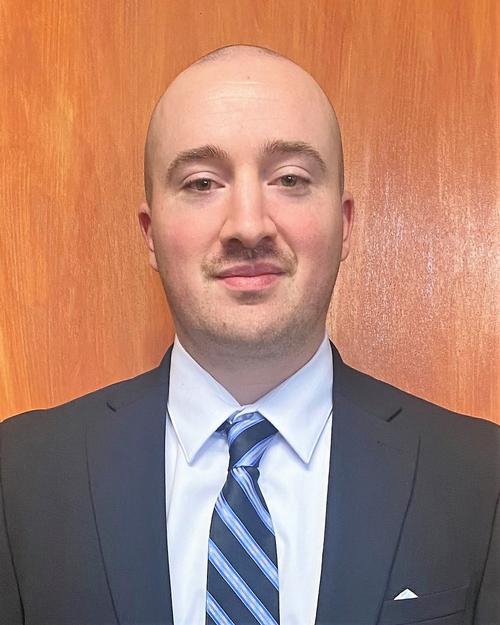 Our family’s Christmas tradition is giving my cousin his birthday gifts and watching him open them before anyone else gets their presents, since his birthday is on the 23rd. It was always somewhat confusing when we were kids that this guy got to open up twice as many presents as the rest of us but now it’s a funny and quirky tradition that is special for our family. It also means twice the opportunity for gag gifts because our family is relentless with the goofs and spoofs. 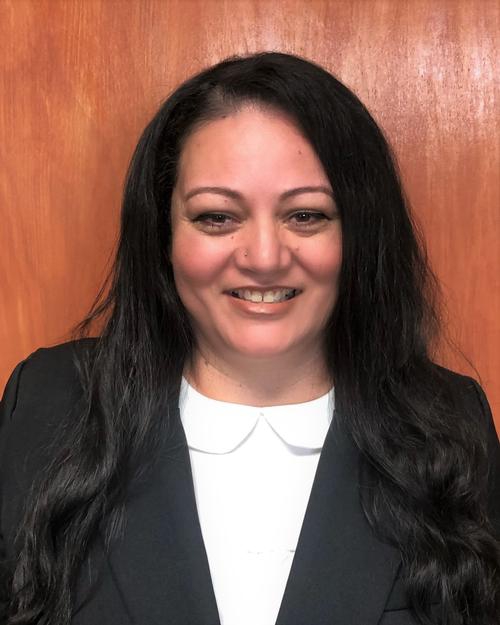 One of my favorite holiday traditions is making tamales with my family. We would get together every year before Christmas and make tamales, this started when I was a young girl, and it is something we did all throughout the years.  Once I had my son, he grew into having the same tradition and learned himself as well. We had a huge assembly line…all of us kids would have to do the spreading and as we got older, we could move up to different positions, like wrapping or filling the tamale. My uncle who hosted every year always rewarded us with a pizza party after all the hard work and then we would enjoy them at our Christmas Eve party every year. 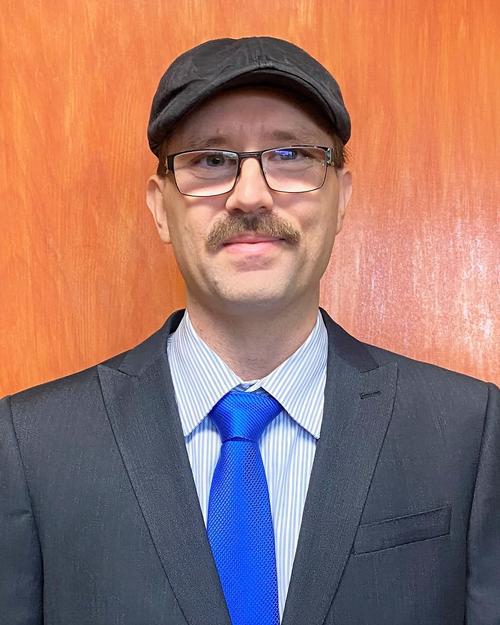 My family’s holiday traditions involve the usual sort of seasonal activities as any other family, I think, like standing up and decorating the Christmas tree, baking cookies and preparing deviled eggs, sipping hot cocoa or chai tea latte with melted marshmallows while wearing ugly sweaters, lighting Duraflame logs in the fireplace, leaving a glass of milk (2%) and cookies (chocolate chip, peanut butter, and/or oatmeal raisin) out for Santa Claus, hanging stockings by the chimney with care, listening to Elvis Presley croon Christmas tunes, those kinds of things.

My family’s traditions also involved gathering on the living room sofa to watch movies and TV shows associated with the holidays (which seemed to play in endless loops on TBS, TNT, USA, NBC, CBS, ABC, and the like). For example, I distinctly remember us watching “Miracle on 34th Street,” “It’s a Wonderful Life,” “The Wizard of Oz,” and “A Christmas Story” (that last one was my favorite, and not just because I looked an awful lot like the protagonist when I was growing up). I also remember James Bond movies playing in marathon chunks around Thanksgiving (I must have watched “The Spy Who Loved Me” starring Roger Moore over two dozen times), and I remember catching holiday TV marathons of shows like “Married With Children,” “M*A*S*H*,” and “Mystery Science Theater 3000” (and “How the Grinch Stole Christmas,” “Rudolph the Red-Nosed Reindeer,” “Frosty the Snowman,” “A Charlie Brown Christmas,” and the December 17, 1989 Christmas episode of “The Simpsons” also got a lot of play in my parents’ house over the years).

Closely related to that, I think my favorite of all the family traditions was the Christmas Eve family movie. As with many kids, my siblings and I were permitted to open one gift the night before Christmas, with the caveat that my parents decided which gift was to be opened. Inevitably, the gift was a movie (or collection of movies, such as a box set). As I look back, I figure this was probably my parents’ means to combat the kids’ typical Christmas Eve restlessness (I think every parent hopes to wear their kids out such that they can actually fall asleep on Christmas Eve, and I know that as a kid I always felt too antsy to sleep, or at least to sleep soundly, on Christmas Eve or Christmas morning). Watching a movie right before bedtime could help the kids fall asleep, they probably thought. And like parents often are, they were probably right. Mostly.

I remember many of these Christmas Eve movies actually left me feeling energized for having consumed them, and many of them became among my favorites even to this day. I remember falling in love with the original Indiana Jones Trilogy, “E.T.-The Extra Terrestrial, ““Close Encounters of the Third Kind,” “Jurassic Park” (gee, a few Spielberg movies, huh?), “Forrest Gump,” Disney’s animated “Beauty and the Beast,” and Tim Burton’s “Batman” and “Batman Returns” in this way. Popping those tapes into the VCR, hitting “Play,” and rushing to the couch to watch with my parents, brother, and sister was a real treat, even better than the movies. Later, the VHS videocassettes and VCRs gave way to DVD discs and DVD players, and some of the gifted movies included “Shaun of the Dead,” and “Kill Bill: Volume 1.” Later still, we traded the living room sofa for the cinema, going to Century Theatres on Christmas Eve to watch fare like “Mars Attacks,” “Kill Bill: Volume 2,” the Coen Brothers’ remake of “True Grit,” and “Django Unchained.” The milieu may have changed, and the movies may have become a bit more explicit in their content (and MPAA ratings), but the Christmas Eve family movie tradition remained, and it was a wonderful time every time.

An additional tradition, one that I miss dearly, was driving to the K Street Mall right around Christmas time in order to skate at the outdoor Downtown Sacramento Ice Rink just across the street from the Hard Rock Cafe. Not that I can skate worth a darn, mind, and the rink is exceedingly small, but it has a real charm and intimacy, and I enjoyed the family trips there immensely. The K Street Mall no longer exists, of course, having been supplanted by the Golden 1 Center, but the Downtown Sacramento Ice Rink remains, within short walking distance of the Cathedral of the Blessed Sacrament, the Crest, and other Downtown Sacramento landmarks. With my family members now largely scattered to the wind, taken with their own families’ needs and wants, visits to the outdoor rink are no longer a part of my family’s holiday traditions, but they remain forever etched in my memory, and always bring a smile to my face whenever I reflect back on them. 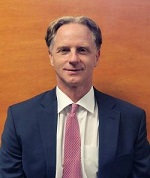 One of our favorite family holiday traditions is going to San Francisco for the day. The city seems more peaceful for some reasons during the holidays. We like to take a long walk through the city: sometimes up the steps to Coit Tower, sometimes along the water by Crissy Field. At some point we usually end up in Union Square to see the big Christmas tree. We always end the day with a tasty Italian meal in North Beach! 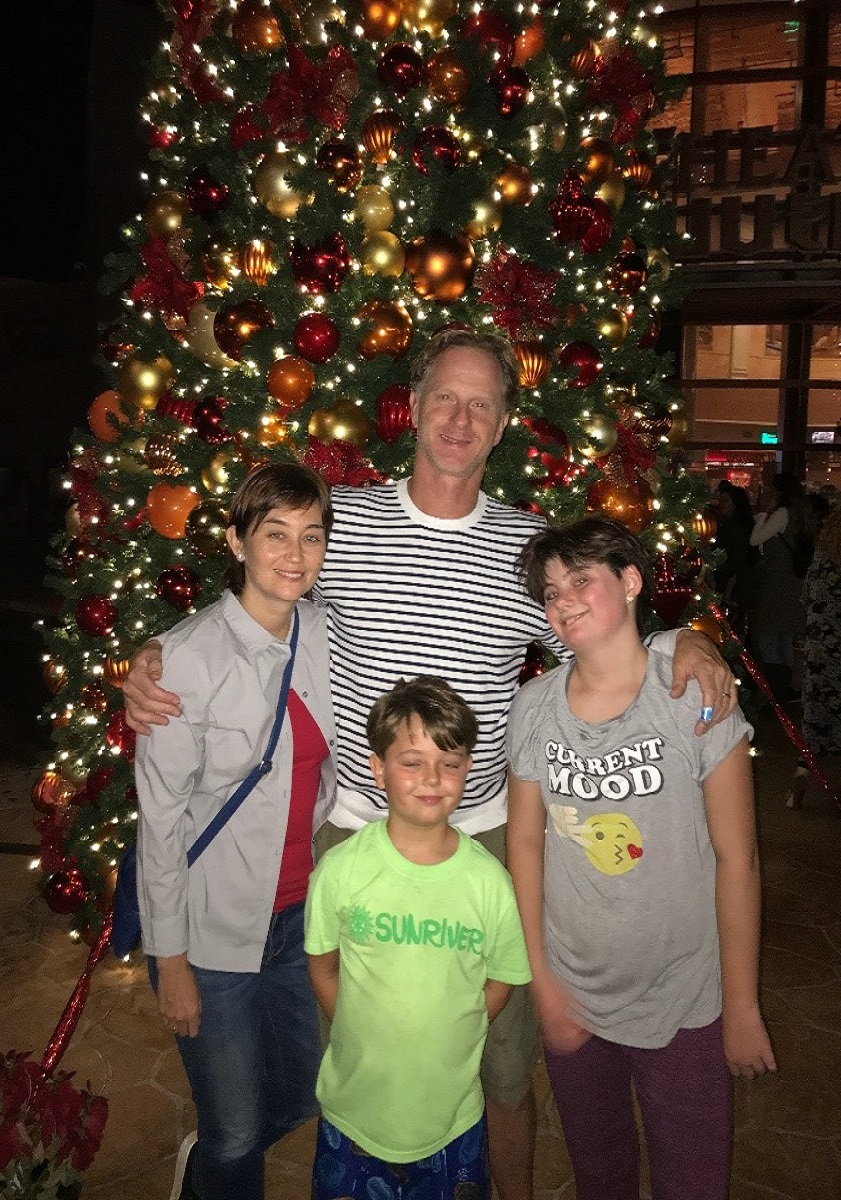 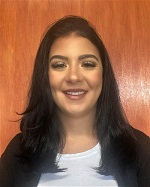 A holiday tradition my family and I have is usually very lowkey. Us kids would always be the first ones up of course ready to open our presents. My parents and I would get started on making Christmas dinner. It would usually include ham, stuffing, green beans, homemade mashed potatoes & gravy, biscuits, and cranberry sauce. While all of that was cooking, we would be watching the classic “A Christmas Story” movie being that it is always on repeat the day of Christmas. After eating we would all relax together in our PJ’s and watch Christmas movies and eat cookies. Our family always took advantage of being able to relax on our days off from school and work. 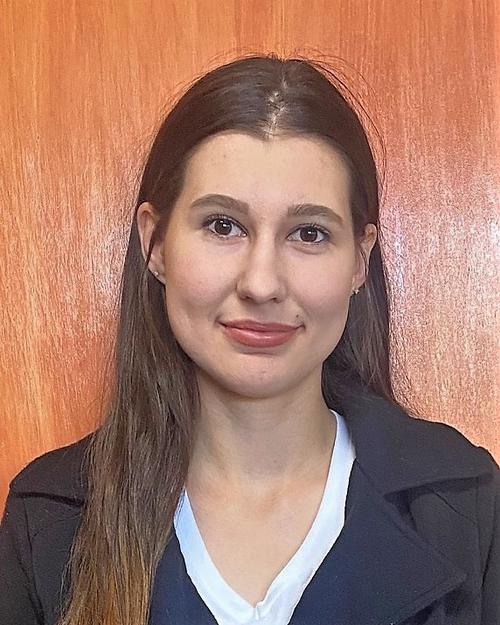 A holiday tradition my family and I follow is one that we recently started when our son, Theo, was born in 2021. On December 1, we set up the Christmas tree and hang our own custom ornaments from Apple Hill, put the stockings up and decorate, as well as drink delicious hot chocolate. We then set up our countdown chocolate calendar till Christmas and make our gingerbread house. This year will be Theo’s second Christmas. On Christmas Eve, we go to church and celebrate our religion. On Christmas day we celebrate together as a family, we say our grace and eat a delicious meal of Turkey, mashed buttery potatoes, Pecan pie, Cranberry sauce, Devil egged salad, Hawaiian buns, Broccoli, Martinelli’s, and an Eggnog drink. After our meal we gather around the tree and unwrap the presents, even though there were many toys our son’s favorite part was the wrapping paper. The best part of this tradition is being able to celebrate it together as a family and being able to give each other gifts. 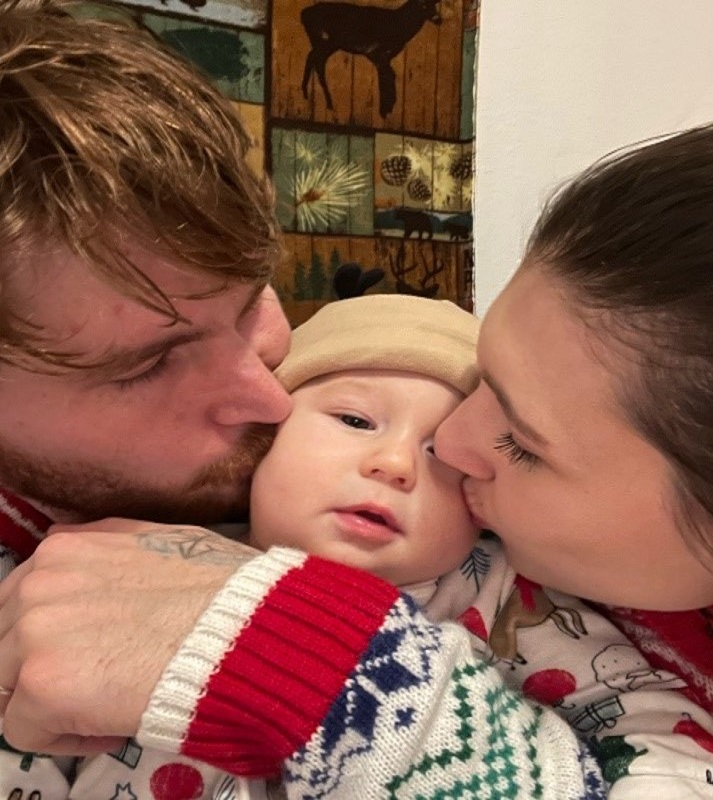