Captive Insurance - Lessons to Be Learned From the Avrahami Case

A pure Captive is owned and controlled by one entity and insures that entity and/or its subsidiaries. A "group" captive is an insurance company owned and controlled by two (2) or more unaffiliated organizations, which is formed to provide insurance to its group or association of owners. The owners are usually companies from a related business field.

The Captive can earn investment income on the premiums paid. This investment will allow more funds to be available to pay claims and/or increased profits. The Captive will reduce the administrative costs such as agent commissions, compliance with federal and state regulations, office overhead and salaries otherwise inherent in commercial insurance premiums.

Captive Insurance Companies may be formed within the United States or off shore. Several states now have captive insurance including Nevada, Hawaii, Montana, Utah, Delaware, Washington and Vermont. 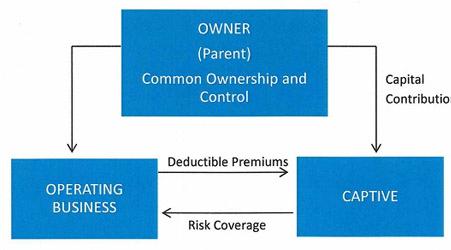 Captive insurance is a very powerful tool in insuring against business risks. In a successful captive scenario, an IRC §162 deduction is available for insurance premiums paid by the insuring business and up to $1.2 million of the captive insurance company's earnings may escape taxation. The IRS is aware of these powerful benefits and believes that numerous abusive arrangements exist that do not, in fact, offer valid insurance.

In examining a captive arrangement, the IRS will initially demand copies of all promotional materials. Throughout the IRS examination, the IRS will look for the following "red flags":

The existence of these so called "red flags" by no means automatically invalidates a captive arrangement. The IRS may attempt to use these "red flags" as indicators to assert that in substance the captive arrangement lacks risk shifting, risk distribution, and fails to qualify as insurance in the commonly accepted sense. This review of the facts by the IRS is often times limited to semantics in marketing materials and one or two technical missteps. The IRS is using the soft-doctrine of substance over form as a blunt weapon to attack certain captive insurance arrangements which the IRS perceives as a form of abusive tax shelter. Essentially, the IRS is taking the position that in substance, certain captives simply act as a self-insurance bank account.

There is no statutory definition of the term "insurance." The issue of whether arrangements involving captive insurance companies qualify as "insurance" for Federal tax purposes has been a source of considerable contention between the Internal Revenue Service and taxpayers. The U.S. Supreme Court, however, has established two necessary criteria for an arrangement to be considered insurance: risk shifting and risk distribution. Also, the arrangement must involve insurance risk and meet commonly accepted notions of insurance.

In August of 2014, GS Manufacturing, Inc. petitioned the U.S. Tax Court to appeal the disallowance of approximately $710,000 in insurance premiums paid to its section 831 (b) Captive Insurance Company. The basis for the IRS disallowance was that the Captive Manager's risk pool was not "risky enough" to provide adequate risk distribution.

The IRS has not been uniformly successful in asserting that position. In an earlier opinion involving captives, a majority of the U.S. Tax Court in Rent-A-Center, Inc. v. Commissioner held that payments by a parent company's wholly-owned subsidiaries to a wholly-owned captive insurance company were fully deductible under section 162 of the Internal Revenue Code of 1986, as amended, as insurance expenses. The decision reverses the Tax Court's prior analysis regarding the deductibility of premiums paid by affiliated subsidiaries to a captive (referred to as a brother-sister captive insurance arrangement) and agrees with the Sixth Circuit that there can be sufficient shifting of risk in such an arrangement for insurance to exist and premiums paid to the captive to constitute deductible insurance expenses. This opinion is favorable for taxpayers because it demonstrates that captive insurance companies can be legitimate business arrangements entitled to special tax treatment if structured and managed properly.

In deciding whether the subsidiaries' payments were deductible, the Tax Court first determined whether Legacy was a bona fide insurance company. Although Federal income tax consequences were considered during the formation of Legacy, the court ruled that the formation of Legacy was not a tax-driven transaction. Specifically, the court concluded that Legacy was not a sham because RAC created the captive for significant and legitimate non-tax considerations, including increasing the accountability and transparency of RAC's insurance operations, accessing new insurance markets, and reducing risk management costs. Further supporting the court's holding were its findings that Legacy entered into arm's-length insurance contracts for workers' compensation, automobile, and general liability claims; charged actuarially determined premiums; was subject to regulatory control; paid claims from its separately maintained account; and was adequately capitalized. In the Kilpatrick Townsend Tax Team's experience defending captives, the IRS focuses on the types of coverage the captive insures and the extent to which the captive operates as a business with maintenance of books and records, a claim processing procedure, and other operational systems a business would employ. The fact that Legacy covered workers compensation and other common business risks of loss weighed in Legacy's favor and should have deterred the IRS from litigating the case.

Turning to the issue of whether the payments to Legacy were deductible insurance expenses, the court analyzed the four criteria mentioned above: risk shifting, risk distribution, whether the captive arrangement involved insurance risk, and whether the arrangement met commonly accepted notions of insurance. The Tax Court held that all four requirements were satisfied. In its analysis, the court focused on risk shifting; in particular, whether the insurance policies at issue shifted risk between RACs subsidiaries, as the insured entities, and Legacy. In doing so, the court examined the arrangement's economic impact on RAC's subsidiaries to determine if the subsidiaries had, in fact, shifted the risk. It concluded that the policies shifted risk, acknowledging the Sixth Circuit's ruling in Humana v. Commissioner that brother-sister captive insurance arrangements may shift risk. Based on the specific facts presented to the court, it found that Legacy was a separate, independent, and viable entity; was financially capable of meeting its obligations; and reimbursed RAC's subsidiaries when they suffered an insurable loss. Moreover, a payment from Legacy to RAC's subsidiaries did not reduce the net worth of the subsidiaries.

Recent articles describe a greater IRS concern regarding Captive Insurance arrangements. The IRS recently filed their reply in the Avrahami case in Tax Court. Avrahami dealt with a retail jewelry store owner paying substantial insurance premiums for terrorism insurance for his jewelry store and his real estate holdings. The IRS attacked those payments as to whether they were ordinary necessary business expenses and as to whether the insurance premiums were determined in a business-like manner.

The Avrahami petition and the IRS reply brief are approximately 600 pages in length. These are some conclusions and lessons to be learned from those filings:

As many of you may know, I was an Income Tax Auditor with the Franchise Tax Board many years ago. During that time, the IRS and the Franchise Tax Board were conducting "program audits" of what were described as abusive tax shelters. I see some similarities with the audits of Captive Insurance Companies where the IRS appears to be attacking at the promoter level. One major difference with this situation than in years past is that the "Captive Insurance" is specifically created by IRS section 831 (b), which has been in existence since 1986. Program audits of abusive tax shelters typically involved significant factual misrepresentations by the promoter. Shelters typically involved tax payers in groups with the exact same factual misrepresentations. Auditors had a very programmed approach to the audits and the appeals process for these taxpayers. Here, each client may be involved in a common risk pool. There is the risk of an attack to the pool itself as to whether it provides sufficient risk diversification. If an adverse determination is made regarding the pool, then the other members of the pool would be treated as a program audit. However, a properly formed captive would still involve a unique actuarial determination regarding the insurance coverage and premiums.

IRS Section 831 (b) and captive insurance arrangements do provide meaningful benefits to the national economy. Congress created the 831 (b) captive arrangement for the very important and real purpose of helping businesses acquire insurance at an affordable price when the business may not otherwise be able to do so.

A large focus in the Avrahami decision was the reasonableness of the expenses and the manner in which the premiums were determined. Clients should carefully examine both of these issues. In particular, we should review with the administrators the proposed lines of coverage, the manner in which the premiums were determined and the availability of similar coverage from commercial lines at a lower cost. Does the captive insurance arrangement provide significant protection independent of the potential tax savings? Does the captive manager's pool provide enough "risk" for the required risk distribution?

View the IRS brief for this case.​