I continue to be surprised when I see persons of very high net worth that fail to adequately prepare for the very real possibility of divorce. Half of all divorces will occur in the first seven years. The chance of a first marriage ending in divorce over a 47 year period is 67% (The Seven Principles of Making Marriage Work, pg. 4, John M. Gottman, M.D.) These statistics confirm this very real need to prepare and protect assets acquired prior to marriage. A premarital agreement can also be used to protect one spouse from the other's debts or liabilities.

Harold Hamm married Sue Ann Hamm in 1988. Sue Ann was his second wife and was a decade younger. She was working in the company Harold founded as an attorney. They did not have a premarital agreement. 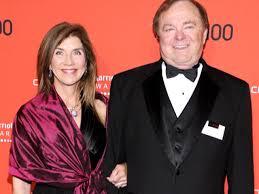 At the time of their marriage, Harold was already a legendarily successful wildcatter with a proven track record for finding oil. Harold had discovered and was acquiring leases in Canada, Montana and North Dakota in what is now known as The Bakken Formation. The Bakken Formation helped the U.S. oil production rise to levels unseen in decades.

The court did not fully buy Mr. Hamm's argument that discovering these oil fields were not due to his skill or expertise. The divorce proceedings were acrimonious and many of the filings and hearings were kept confidential. Nevertheless, the filings that were available illustrate the acrimonious nature and the legal posturing involved. Ms. Hamm accused Harold of infidelity and apparently documented this with audio and video tapes from their home. She had already moved out of the home and to another city. Harold apparently asserted that the tapes evidenced that the marriage at that point the marriage was "loveless" and "in name only".

The divorce court awarded Sue Ann assets worth $1 billion. The judgment required Mr. Hamm to pay $320 million by the end of 2014. The balance to be paid is approximately $7 million each month thereafter. The judge placed a lien on 20 million shares of continued stock worth $1 billion. 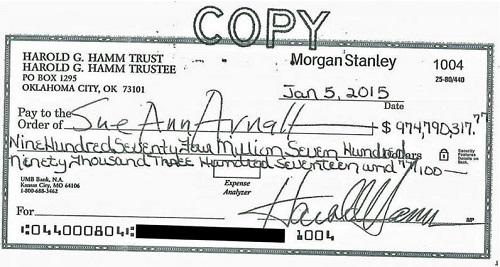 Harold actually wrote Sue Ann a personal check for $974 million. The theory seemed to be that if the check was cashed and the benefits accepted, then an appeal would be more difficult. Harold Hamm also reportedly paid Ms. Hamm more than $20 million during the divorce proceedings. Sue Ann Hamm cashed the check for $974 million and continued with her appeal. Mr. Hamm has also appealed asserting that the award is too high and that the oil-related assets are no longer worth as much because of the sharp drop in oil prices.

A lot of heartache, drama, legal fees, and risk of loss would have been avoided with a premarital agreement. As with most important decisions or actions, planning is needed to protect your family and your assets. If you have any questions about a premarital agreement, please call the Goralka Law Firm for more information.​