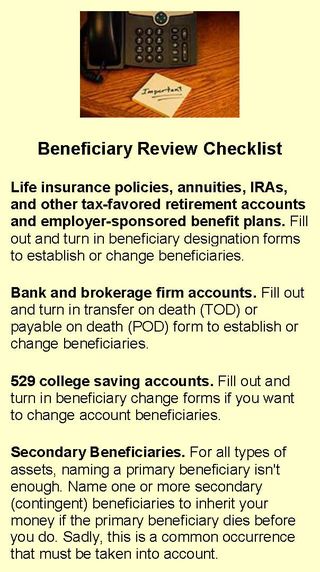 With today's relatively generous $5.34 million federal estate tax exemption, you may think estate planning is only a concern for the rich. Wrong!

Regardless of your income or net worth, there's one estate planning move you should probably make right now: Check the beneficiary designations for your life insurance policies, bank accounts, brokerage firm accounts, retirement accounts, and other assets. If you've not yet turned in the proper forms to designate beneficiaries, do it now. If your forms are out of date, update them.

The consequences of failing to take these simple steps can be serious. If you don't believe it, consider the following trifecta of real-life horror stories.

In Herring v. Campbell, the Fifth Circuit Court of Appeals ruled that a decedent's beloved stepsons weren't considered his "children" under his pension plan's terms.

Under the plan's terms, when a participant died without designating a valid beneficiary, the deceased participant's benefits were distributed in the following order of priority:

The stepsons sued, claiming they should have inherited the benefits. Hunter's estate had been left to them, and his will referred to them as his "beloved sons." The stepsons claimed they were in fact Hunter's children, because he had "equitably adopted" them by his actions.

The district court concluded that Hunter intended to leave his benefits to the stepsons and that the plan administrator had abused her discretion by failing to consider the stepsons' equitable adoption claim.

On appeal, the Fifth Circuit found no error in the administrator's interpretation that the term "children" for purposes of the plan meant biological or legally adopted children as opposed to unadopted stepchildren. The Fifth Circuit found that nothing required the plan administrator to incorporate the theory of equitable adoption into the plan's definition of "children." Therefore, the district court decision was reversed, and all of Hunter's pension benefits went to his six siblings, rather than his stepsons.

In Egelhoff v. Egelhoff, the U.S. Supreme Court awarded all of a decedent's pension benefits and his company-provided life insurance proceeds to his ex-wife. Even though the decedent had intended to give these assets to his children from an earlier marriage, he had forgotten to change beneficiary designations after the divorce, so his ex-wife remained the named beneficiary. Two months after the divorce, he was killed in a car crash.

The Supreme Court ruled that the beneficiary designations trumped state law that would have automatically disinherited the former spouse. So the ex got the money, and the kids got the bill for an expensive and unsuccessful legal fight.

Kennedy Estate v. Plan Administrator for the DuPont Saving and Investment Plan is another Supreme Court decision that favors a former spouse. Here, a decedent's ex-wife had specifically waived any interest in his retirement and investment plan under the divorce agreement. Believing the divorce agreement was the last word on the subject, the ex-husband failed to submit the form required to officially change the plan beneficiary from his ex-wife to his daughter. He died seven years after the divorce. The company's plan document stipulated that beneficiaries could be changed only by submitting the form.

The Court ruled that the grossly out-of-date beneficiary designation trumped the divorce agreement. So the ex-wife collected $400,000 from her ex-husband's company savings and investment plan -- and the daughter got nothing.

Beloved stepchildren and divorces are not the only scenarios where failing to turn in or update beneficiary designation forms can cause big problems for someone's intended heirs. You face the same issue if you have a falling out with a child or sibling. Or you might want to leave more of your life insurance benefits to an adult child who just had quadruplets and a bit less to your childless heirs.

Special Advice If You're Married

If you're married and have set up accounts naming you and your spouse as joint owners with right of survivorship, the surviving spouse will automatically take over sole ownership when the first spouse dies. If that's what you intend, great. But you may want to name some secondary beneficiaries to cover the possibility that your spouse dies before you do.

Note that in the nine community property states (Arizona, California, Idaho, Louisiana, Nevada, New Mexico, Texas, Washington, and Wisconsin), assets accumulated during your marriage are generally considered to be owned 50/50. If you live in one of these states, you usually need your spouse's consent to change beneficiaries.

Another advantage of designating individual beneficiaries is that it can avoid probate, because the money goes directly to the named beneficiaries by "operation of law." In contrast, if you name your estate as the beneficiary and then depend on your will to parcel out assets to the intended heirs, your estate must go through the potentially time consuming and expensive process of court-supervised probate.

Moral of the Horror Stories

It's a good idea to check your designations at least once a year or whenever significant life changes occur. You can usually conduct a beneficiary checkup and make needed changes in just a few minutes. Most beneficiary forms can be conveniently accessed and submitted online. But if you wait, it could be too late -- as the unlucky folks in the aforementioned horror stories can attest. Please do not hesitate to call if you have any questions.